Birmingham Airport gets all shook up for brave Katie.

THE Birmingham Airport ‘family’ has come together to support one of its own.

Workers from the airport and its airlines came together to take part in a global dance craze to show their backing for battling young mum Katie Scarbrough who is suffering from advanced bowel cancer.

Katie, aged 32, works at Birmingham Airport for SN Brussels and has previously worked for the ground handling agent Aviance and British Airways.

Although seriously ill, Katie, who lives in Lichfield, is raising money for cancer charities and writing an inspirational blog.

She wanted to put a ‘Harlem Shake’ on her YouTube site and staff throughout the airport rallied to the cause.

An appointment for chemotherapy treatment prevented Katie from being at the Eurojet terminal to watch the dance in front of Cello Aviation’s VIP jet but her children Sam, aged eight and Sophie, who is four, took part watched by Dad Stuart.

The airport provide a bus for the dancers, firemen joined in and security staff helped make it an afternoon to remember.

Some special guests dropped by including mascots from Aston Villa and Wolverhampton Wanderers along with Batman, Mr Blobby and ‘The Stig’ together with his ‘reasonably priced car.’ 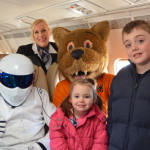 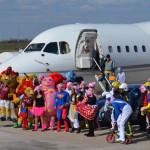 Caption: The Stig, the Wolves Mascot and Kris Thelfall-Leasure from Cello Aviation with Sophie and Sam Scarborough.

About the author Scott Scarbrough

Originally from Glasgow, I live in Fleetwood with my partner Andrew and work as a professional Singer and freelance web & media Creative.

All posts by Scott Scarbrough →