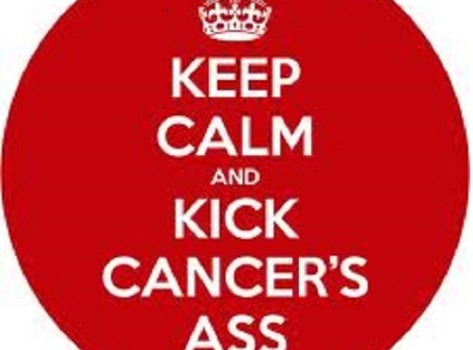 Doing Nothing Is Not An Option!!

With all the gallivanting I have been doing recently, I haven’t kept you up to date with what’s happening with my treatment.

After my last blog, regarding treatment and the conversation I had with my Bowel Surgeon about operating and him saying that it basically wasn’t possible as he couldn’t guarantee I would wake up after. My Oncologist referred me to a few places, as she doesn’t have any further Chemo options for me. I was referred to The Christie in Manchester, back to the Royal Marsden in London and also to a Surgeon called Mr Toogood in Leeds.

Mr Toogood came back to me, when we were driving to Belfast and after looking at my scans advised us that he had no surgical option available. So that was that, straight to the point. But, I still believe that doesn’t mean to say there isn’t another surgeon out there, who may have an option for me.

I haven’t heard from The Christie, however I did email them a couple of days ago chasing the referral after an article I was sent about a Chemo Bath. They do this procedure in Basingstoke and at The Christie. I don’t know that much about it as yet, but know it’s an operation whereby they take what they can out and put warm chemotherapy inside to try and kill the cancer. It has worked to prolong a cancer patient’s life. However, I know it’s not so black and white and there must be some sort of criteria before you can be accepted for it.

The Royal Marsden has been in touch and has always said there door is open to go and speak too. However, I know the last time I was there in January they only had the Phase One trials available, where they had only been tested on animals. They also said I was weak and probably not up to going through the trial. This is true, as I had only just gotten out of hospital the day before my appointment with them. And to be honest, my health is a bit like that now too. After being in hospital a few weeks ago and not being able to eat due to the kink in my bowel, I have lost a lot of weight. My legs are weak and I struggle to climb the stairs. I need Stuart’s help with things an awful lot more. I feel like a 70 year old!! But, I am determined to build myself up, as I see the Royal Marsden’s phase one trial as a last option after I look at other things.

I have taken it upon myself to look at other options for treatment via Private Healthcare. A lot of people contact me through my blog, Twitter or Facebook giving me advice on Doctors to contact, alternative medicines and their own stories about battling cancer, whether that be themselves or people close to them. Thank you for all of these as I find them so helpful and inspirational. I had one friend contact me Tony, regarding a Professor in Harley Street that he has been treated by. His name is Professor Justin Stebbing and he works in Harley Street. After speaking to Tony on the phone about him and looking him up on the internet, I knew I had to contact him to see if he could help me in any way. So I emailed him details of my diagnosis and treatment. On the same day I emailed the details, he actually emailed me back himself. I found this amazing as you don’t expect a Professor to contact you directly, I expected his PA to do it. Anyway, he asked for my biopsy to be sent to him to have a look at, as he is interested in how the cancer cells are set up and the biology side of it all. He has since asked for my scans as well, which all have been sent.

Only a few weeks ago, after asking my Oncologist to send my biopsy to Harley Street, she came to see me. I was having Chemo at the time and she said to me that I couldn’t keep using up my energy running up and down the country looking for answers when I will be told the same thing. I was so upset, and started crying and told her that I can’t just do nothing and that every time I come into hospital for scan results etc I keep getting told negative information and that doesn’t help me stay positive. I said I am only 32 and have two kids and I need to do all possible for them. She thinks I should go home and enjoy the rest of my time with my family. But I don’t want my kids to see me waste away, I also want them to now their mummy fought this to the end and didn’t give up!!! I would still rather, die on an operating table than die somewhere like a hospice as I know at some point I wouldn’t want the kids to see me in any kind of fragile state. And not seeing them would be completely heart breaking. I told her that I wanted my biopsy sent to Professor Stebbing as at the time I hadn’t heard back from any of the places that she referred me too, and I had heard back from him directly.

I left after Chemo feeling low and angry, but I know I need to take control and I have felt like that for a while now. Yes Private Healthcare is going to be expensive, but trying to prolong my life is worth it and I am sure anyone in my situation would do it. I still want to raise the awareness needed about Cancer but on the other hand I need to be slightly selfish with my treatment too. I think anyone in my situation would feel the same too. I am helping Bowel Cancer UK with their #Never2young campaign about raising awareness of Cancer in younger people as reaching diagnosis when you are under 50 is frustrating, as on most occasions doctors think the symptoms relate to other things. This is what leads to delayed diagnosis of Cancer, and we all know early diagnosis is key!! This is what happened to Laura, and it shouldn’t have. Stick to your guns when you are with a GP and if you think it’s something more tell them so it can be tested. That is better than worrying, but at the end of the day it may not be anything. Also, some people find the symptoms for Bowel Cancer embarrassing to talk about. My advice is I’d rather feel embarrassed and talk about it than be in the position I am in, the earlier the better.

I am also helping Cancer Research UK with Race for Life. Amazingly, I have my Cousin Laura running in Aberdeen, Stuart’s Cousin Gillian running in Glasgow and three teams ready to do it  One in Belfast made up of #TEAMKATIE, one in Solihull made up of friends from the airport and the one I am hoping to participate in at Sutton, made up of friends and family who live locally. So if you haven’t entered in your local area, do it now!! All the money helps go towards the research which is vitally needed to kick cancers ass!! J

I went into hospital last week to have some fluid drained of my tummy as I was going to Center Parcs and didn’t’ want anything affecting our trip. I didn’t get much off but as Tesco says, every little helps.

Where I am at now with treatment is that I still am having Cetuximab every week. But, my Oncologist thinks it’s not working as my tumour markers have raised slightly. Considering, they were over 400 before I started Cetuximab, then dropped to 70 and have now gone up to just over 100, they are still a lot lower than they were before I started, so it must be doing something. I feel better in myself on Cetuximab and my tummy feels lighter and smaller each time I have a treatment, so that can only be a good thing. I have argued with her to keep me on it for at least the next couple of weeks as the real test is the results from the CT scan I had on Friday. Those I will get in a couple of weeks. My fear is not going to hospital for any treatment at all if she stops it. I find that going to the chemo unit every Wednesday a sort of safe haven and I love al the nursing staff there. They know me, they love my wigs and I have a great rapport with them. They all do an absolutely fantastic job. If I end up not going each week, it will feel like I am doing nothing and that scares me, as then the cancer will grow even more and I am not doing anything to stop it. I don’t know how long it will take to go to Harley Street or even if they want me too after looking at my biopsy and scans. I am not in denial, I know I have stage 4 cancer and it’s inoperable but I need to have the HOPE that maybe there is something more and if I don’t at least try what kind of impression does that send to my kids?