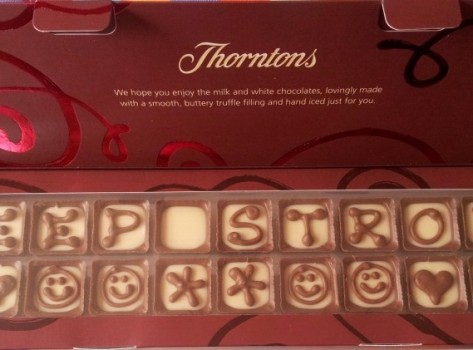 Five days after my 1st Chemotherapy I started to be sick. After being sick for 24 hrs I was admitted into hospital for a day and a night to get the sickness under control and to have some fluids through a drip. Whilst in hospital I started to get a very sore head which affected my vision so I couldn’t focus properly. I got discharged the following day, however as soon as I got home I started to get the ‘migraine’ again and spent most of the time with my eyes closed, because I couldn’t see very well.

I’ve never ever had a headache as bad before. I honestly felt like ripping my head off. Stuart was trying to get me to take some pain killers but because my head was so sore I was being sick again. So after being out of hospital for less than 24hrs, I was admitted again!! This time my stay in hospital was a lot longer, it ended up being 9 days in total. In that time I had a CT Scan and an MRI Scan to check my brain (and yes I do have one…lol) to see if there was anything noticeable causing my headaches. Both scans where clear, so my headaches could have been due to me being sick and retching. To help with the sickness I had a syringe driver attached to me through a needle in my tummy for a few days. The syringe driver regularly pumped an anti sickness drug called Levomepromazine into me. I will have this put in before my chemotherapy next week to help stop the sickness from happening again.  It took awhile to sort out getting a Hickman Line inserted which was only done yesterday. The reason it took so long was because I had to have my blood thinning injection (Enoxaparin) stopped 48hrs before the procedure . So the Hickman Line was only put in yesterday. The Hickman Line is a tube inserted in the vein near my collar bone which is used to take blood and give me my chemo treatment. It was sore getting the local anesthetic injected, that stung like mad. The Hickman Line can stay in for months and stops me having to have needles inserted in the back of my hand or arms each time I need medication intravenously.

I’m happy to say I am feeling a lot better now, a bit more normal….well whatever normal for me is. My next chemotherapy is next Wednesday and I have had a slight change to one of my medications due to the sickness I have had. Instead of having one of them in tablet form I’m having that changed to intravenously, and because of this I will now be having my Chemotherapy every two weeks.

I wasn’t able to see the kids in hospital as children under 12 aren’t allowed on the ward due to infections. But I didn’t really want them to come in and see me with needles in my arm and hospitals are boring places for kids. So thankfully we have been blessed with lots of support around us and the kids have been kept very busy. For a couple of days before I was officially discharged I was even allowed to come home through the day and go back at night which has been lovely to see the kids in their home environment and have dinner with them.

One of my worst fears happened whilst I was in hospital, it was the dreaded moment Sam found out his mummy had the C word. Another child, slightly older than him had obviously overheard an adult conversation went and told him.  So Sam, out of the blue asked Stuart if it was true. This wasn’t a word we wanted to use with him, we already told him that mummy had a poorly belly and the doctors where giving me some medicine that was going to make me more poorly to begin with but make me better long term. Both Stuart and I felt that was enough for now for a 7 yr old to take in. But that has since been taken out of our hands and Stuart had to respond truthfully to him and say that ‘Yes Mummy has Cancer of her tummy’. I’m still shocked by the whole thing!!

On a happier note I want to say a big thank you for all the cards and flowers and presents I have received this week. It really means soooo much having all this support behind me. Both Stuart and I really appreciate it. The photo attached is off one of those presents sent by my friend Sarah and her family. I really cant bring myself to eat it…lol