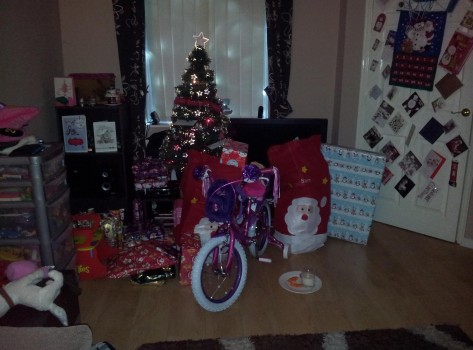 Twas The Season To Be….Sick!!

As Forrest Gump said, “Life is like a box of chocolates, you never know what your gonna get”. Well, I obviously chose the worst chocolate of them all!!

I had built Christmas up to be a day were I was going to feel great, have a few drinks, enjoy spending time with my family and watch the kids play with their new toys. I wanted it to be the best ever Christmas!! However, for me it didn’t match up to my expectations. It’s funny, on Christmas morning Sam wouldn’t come downstairs without one of us going with him as he thought Santa was still there. Down the stairs we went and the first thing Sam noticed was Sophie’s new bike. She was soo excited sitting on it with a big smile. Sam opened his biggest present and it was a new Scooter he had asked for and he was happy too. Sophie was in her element when she found her Jessie Costume (from Toy Story), she immediately put it on. That for me was the best part, and to be honest I was feeling sick at the time but made myself push through it, as I didn’t want my sickness to ruin the day. As I was feeling low anyway, I couldn’t help but think that that could be the last time I see them opening presents at Christmas.

My mum and dad were over for Christmas Day and it was the first Christmas I have spent with them for 12 years, so it was nice having them here. There was 12 of us on Christmas Day, we spent it at Stuarts’ mum and dads house. There was a lot of drinking (not by me), food and games. It was Christmas Day night that Sophie and Sam started to feel unwell.

On Boxing Day my brother and sister in law came over. They couldn’t come over for Christmas Day as they took my 98 yr old Nana to their house for dinner. Sophie and Sam were still not feeling great and Sophie had a high temperature. We pretty much spent the next few days in the house as the kids were ill, I was ill, my mum wasn’t feeling great with a chesty thing and Debbie had all day Morning Sickness.  By New Years Eve we ventured out for a Chinese in Rugeley for my Dads 62nd Birthday. My family flew back to Belfast on New Years Day.

Because of all the illness the 2nd January came around pretty quick. I woke up that morning and started throwing up. I was due at the hospital really early as I had my CT Scan and Chemo booked in. In the end I only had the CT Scan, as they thought it best not to go ahead with the chemo and leave it for a week. By this time my tummy was distended and very uncomfortable and I wasn’t able to eat properly. My Oncology nurse organised for me to stay in and get a drain inserted to get rid of some of the fluid. I had 4.7 litres drained off in the end.  It unfortunately hadn’t made any difference with my tummy and I still feel crap! Meanwhile, Stuart came down with the flu really bad and I couldn’t see him for 5 days. He was quarantined to our house and the kids and I stayed at his mum and dads. Stuart normally pushes through his sickness and makes himself go to work but he couldn’t move. He kept telling me that I didn’t need to catch this. So I knew it was bad.

As my chemo was moved by a week we have had no choice but to cancel the Christmas present I had bought for Stuart. We were supposed to have a hospitality package at Rangers Football Club this weekend. I am pretty gutted about that as this was supposed to be a day out for Stuart and I to enjoy and gather memories from. The way I am feeling now, its hard to see when I can rearrange it….we will see.

That now brings me to my CT Scan results.