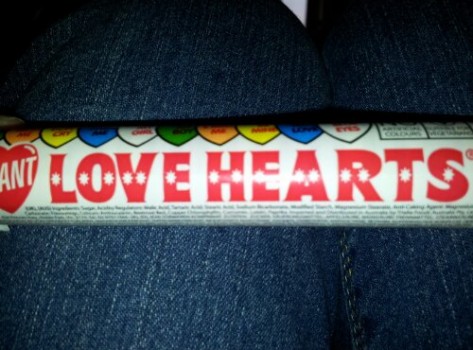 Sharing The Love Of The Love Hearts!!

I know this chemo thing was never going to be easy, but having a pattern whereby after having the actual treatment I now know sickness follows. I absolutely hate being sick. This time I was sick the day after my chemo. None of the anti sickness worked at home which meant I had to be admitted to hospital to have it given intravenously and at a higher dosage. The higher dosage pretty much meant that I slept for a whole 24hrs. On a positive note 3 days after my chemo I had stopped being sick which was a quicker recovery rate than last time.

My new best friends are my love hearts I sat and ate a full pack of them while the chemo was going through. My taste buds have been playing up and nothing tastes nice except the love hearts. By the time all this is done my dentist wont be happy cause my teeth will have fallen out. On the ward in the hospital when I was kept in I was sharing them out to a few of the patients as they felt the same about everything tasting rubbish.

This week  Stuart and I went to Frankie and Bennys, I managed to have a nice glass of red wine and it tasted so nice. Along with that I had chicken and prawn alfredo, its my absolute favourite and had a slight kick to it which helped my taste buds to wake up.

The kids are back from their holidays in Sutton on Sea with my in laws and its nice to have them back especially when I feel really good and can do a little more with them. Two days before they were due back Sophie was on the phone saying she wanted to come home and wanted her daddy. As soon as she was back she was sitting on the floor playing with her toys, I think she missed them.

My brother Chris and his wife Debbie are over visiting from Belfast so they have the tasks of cooking and keeping the kids entertained.

My next chemo is next Wednesday and I think this time I may be kept in straight after this time to try and stop the sickness altogether. As having the anti sickness drugs by IV work better than just the syringe pump that I have been using.

Thank you again to everyone who has written messages of support on here and and on facebook, it really means a lot to see all the support.